In her lab at Baylor College of Medicine, Dr. Gretchen Diehl, assistant professor of molecular virology and microbiology and a member of the Dan L Duncan Comprehensive Cancer Center, and her colleagues are investigating the role the microbiota plays in modulating the immune response in a way that reduces the damage inflammation can do to the gut.

Previous work has shown that the microbiota is required for the immune system to fight Salmonella, for instance. Using antibiotic treatment to remove the microbiota in laboratory animals results in the animals not producing an effective immune response against the microbe.

“In addition, we have learned that an effective immune response also depends on having immune cells called antigen-presenting cells. These cells ‘tell’ other immune cells, called T cells, to mount an inflammatory response to fight the microbes,” Diehl said.

“This results in a balanced response that still can fight back Salmonella, but that is regulated to prevent damage to the healthy intestinal tissue,” Diehl said. “We wanted to know how the microbiota could induce these kind of responses.”

“We found that when we gave the laboratory animals antibiotics, the antigen-presenting cells did not make IL-10. When we put back bacteria in the animals’ guts, only the bacteria that could attach to the intestinal epithelium were able to trigger IL-10 production by antigen-presenting cells and reduce the inflammatory response,” Diehl said. “It’s somewhat counterintuitive because microbes that can attach to the intestinal epithelium can potentially cause disease. But in this case we found that the attachment of bacteria to the epithelium was not causing damage; on the contrary, it was necessary to promote a balanced regulation of the T cell responses that would help protect the gut.”

The researchers indicate that their study is barely scratching the surface; there likely are other mechanisms by which microbes can promote a well-balanced intestinal environment.

Next, Diehl and her colleagues plan on investigating the signaling pathways that are activated when the microbes attach to the epithelial cells and result in triggering a balanced immune response.

“Another take home message is that a healthy microbiota is necessary to allow the immune cells to balance the responses that protect us from those that may harm us as they attempt to eliminate pathogens,” Diehl said. “Eating a diet abundant in whole grains, fruits and vegetables promotes the growth of good bacteria.”

The study suggests that manipulating the microbiota with the goal of modulating intestinal immune responses has potential therapeutic benefits for conditions such as irritable bowel disease.

Learn all the details of his study in the journal Immunity. 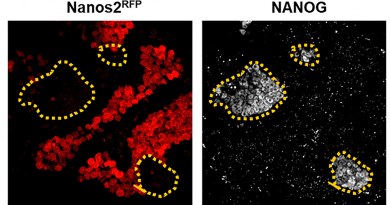