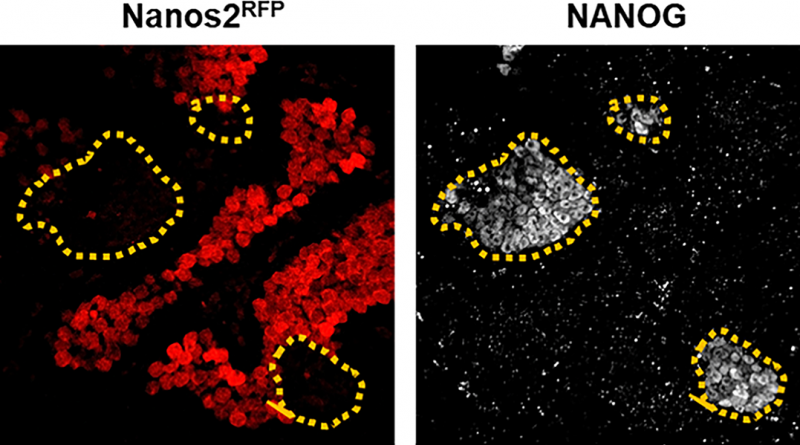 “In the embryo, germ cells initially have the potential to form many different cell types, a characteristic called pluripotency,” said corresponding author to Dr. Jason Heaney, associate professor of molecular and human genetics at Baylor. “Normally, germ cells lose this ability to form any cell type as embryonic development progresses and they become restricted to only form sex cells – sperm in males and eggs in females – in a process known as sex determination.”

Male sex determination also coincides with the embryonic period when the cancer cells that form testicular germ cell tumors can develop, and this timing, according to Heaney, is more than just coincidental.

To test this hypothesis, Heaney, first author Dr. Nicholas Webster and the Baylor team explored whether a gene called NANOS2, which is needed for sex-determination, also prevented embryonic cancer cells developing in mice.

“NANOS2 is crucial for sex-specific development of embryonic germ cells by suppressing the female (egg) fate and promoting the male (sperm) fate,” said Heaney, director of the Center for Precision Medicine Models and member of the Dan L Duncan Comprehensive Cancer Center at Baylor.

Using a strain of mice that spontaneously develop germ cell tumors, the researchers showed that some germ cells lacked NANOS2. Not only did the NANOS2-deficient germ cells fail to mature into sperm, but they remained pluripotent and, crucially, were more likely to transform into embryonic cancer cells. The scientists also characterized the NANOS2-deficient germ cells and uncovered important changes in cell behavior, which could be used to identify and treat cancer cells in the future.

Our work reveals changes in gene expression when germ cells transform into cancer cells that suggest alterations in metabolism and cell division, which could be used for targeted therapies,” Heaney said.

Although it is currently unclear what role NANOS2 plays in the development of human testicular germ cell tumors, this study highlights an important link to the process of male sex determination, providing a new direction for future research.

Read all the details of this work in the journal Development.

For a complete list of funding, see the publication.