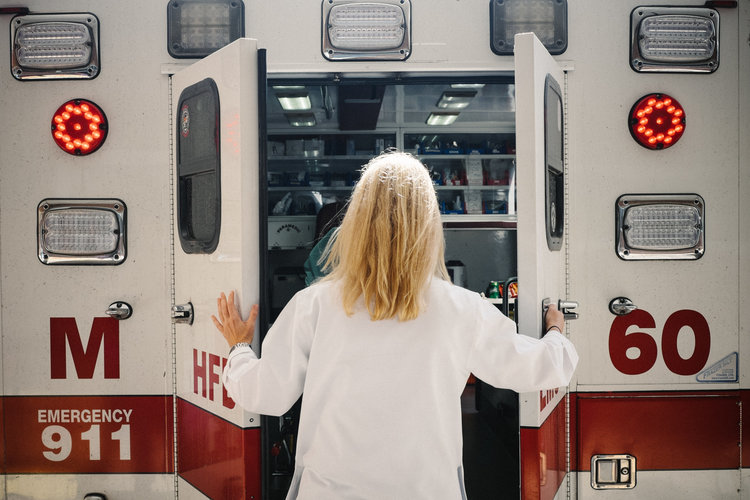 Doha Aboul-Fotouh sat down with MS2 Daniel Wang to talk about his project, Stories from the Center, an inspiring set of photo essays about physicians, nurses, and researchers in the Texas Medical Center.

Progress Notes: On your website, you write about your “call to action” and your mission – “a project that would inject a bit of optimism, positivity, and most essentially, humanity into conversations about medicine.” There you say you “won’t go too far into specifics,” but I’m curious about the process between your call and your mission. How did you decide to put together this project?

Daniel Wang: This all started at a St. Baldrick’s event, where people shaved their heads to raise money for pediatric cancer research. There, I had the chance to meet and take pictures of kids fighting cancer, kids who had beat cancer, doctors, families – I had the rare chance to get a birds-eye view of the entire healing process. For example, I got to photograph a doctor getting his head shaved alongside a patient he treated over 30 years ago, who brought his family to the event too. It was awesome, to say the least.

On the drive home from the fundraiser, I kept thinking, “Why don’t you do that more?” I’d always viewed photography as a hobby, something that let me remember things that I thought were interesting or beautiful. But these pictures were full of stories – stories of triumph, struggle, love, patience, pain, you name it. And part of me felt like it would be a shame if no one got to engage these narratives. The images, however, ultimately belonged to the people who ran the event, so they had control over how they got distributed. But I knew I wanted to use images to tell the stories in medicine that few get to tell or hear.

So, for the next week or so, I spent a lot of time thinking about how exactly I would do that. My initial, more natural pull was towards patient stories. since patients are the person most directly beating disease. But I also felt a desire to include all the individuals involved in healthcare – not just doctors and nurses, but also receptionists, chefs, janitors. I wanted to bounce my idea off of a few people – my family, my girlfriend, a couple deans at the medical school.

The resounding response amounted to something like: “Cool! Start smaller. Then see where it goes.” It’s not always fun hearing that, but it made sense – there were legal hoops to jump through with patients, and I didn’t really know how I would find a lot of these people. So I decided to begin by doing a series of photographs focused on healthcare creators – doctors, nurse practitioners, and research scientists. That ended up being plenty challenging, and I’m very satisfied with the current scope of Stories from the Center. I’m planning on branching out in the near future, however.

PN: How has this project affected you as someone who will soon be providing care? Just reading the stories on the site – of the cupcake man, of Dr. Olutoye’s scrapbook – I’ve gained a very different perspective than the view of the TMC from the 2nd floor ERC. How has your work on the project centered or de-centered you as a medical student?

DW: Interacting with these incredible people, encountering their stories, and creating a digestible platform for a broader audience has been personally inspiring. As a medical student in the preclinical phase, I spend a lot of time studying the minutiae of anatomy, pathophysiology, and treatment strategies. I get few opportunities to zoom in (or out?) and see what’s happening between doctors and their patients, yet human interaction and the care of people inhabits the core of medical practice. This project has reaffirmed and reminded me of that fact. Working on Stories from the Center provided precious, tangible motivation in my own studies, and I hope that it reminds other medical students of why we’re doing what we do. Of course, this project isn’t intended solely for medical students, but I hope it possesses particular weight for people in school.

PN: Has there been a moment for you where you’ve wished you’ve had your camera? Something you wanted to document, but only witnessed?

DW: This might sound a bit odd, and definitely selfish, but there were some tearful moments that I wish I could have captured. With portrait photography, it’s difficult to capture a broad range of emotion – people are very used to simply smiling. Getting a real laugh, much less a real tear, can be very difficult. That was definitely the case with some of these interviews, since I was meeting most of these people for the first time, talking to them for about an hour, then immediately taking their portrait. So when it got real, the greedy photographer in my head was yelling, “You have to get this! This never happens and you’re missing it!” I think every person taking a picture wants to get that high-voltage moment, and intense emotions are a surefire way to do that. However, it feels pretty weird to say, “Hold on, keep crying, I need to grab my camera.”

PN: What did you achieve with this project that you didn’t expect? Something you’re proud of or happy to have witnessed, but that didn’t occur to you initially when you set out to document the humanity in healthcare.

DW: There are a certainly few unexpected moments that immediately come to mind. During the second interview with Dr. Niraj Mehta (“the Cupcake man”), I actually got to follow him and his team around as they performed birthday ceremonies for patients. It’s hard to describe that atmosphere – it feels overwhelmingly positive, but at the same time very solemn. Since I had to avoid patient identifiers in my pictures, I couldn’t include much of that specific interaction in the photo series, but that was something I was lucky to witness.

Another scene I won’t forget: It happened during my interview with a nurse practitioner at TCH in the Heme/Onc unit. We started by taking pictures in a patient rest area – where kids go to chill out, watch TV, play video games. I wanted to go there because it had this natural, soft light. Before I started taking pictures, the nurse practitioner said, “I actually used to sit right over there when I was a kid.” It was this completely unintentional coincidence, and I was super happy because it gave the photo far greater depth.

VIDEO: MS4s on the road to Match Day

Worlds apart, a street away