(Editor’s note: all names have been changed and identifying elements have been removed from this piece.)

“Mr. Jones” is a 53 year old man who came to the emergency room with bright red blood in his urine. He had never had a history of bleeding before this, so he was quite frightened.

His blood clotting labs were extremely abnormal – so much so that I was surprised that he wasn’t bleeding from every orifice in his body at that point. I took one look at his urine, and was shocked to see that it was pure blood. I couldn’t even smell a hint of ammonia.

The physicians in the ER immediately transfused him with packed red blood cells and blood clotting factors in order to save his life. Throughout his time in the hospital, we had to give him over 10 units of blood (our whole body at any given time contains about 12 units). Once the bleeding was under control, we attempted to try to figure out what was causing his bleeding problem.

We thought about every bleeding disorder possible and ran as many tests as we possibly could. One of the tests we ran was abnormal, so we knew that he must have had some sort of bleeding disorder, but we could not pinpoint the exact cause.

“Mr. Jones” used to work in some chemical plants, so he had a lot of occupational exposure to some pretty toxic chemicals. I researched everything I could about hydrofluoric acid, benzenes, and any other chemical that the patient rattled off to me that he had been exposed to. Nothing I could find indicated that it would cause this kind of late onset bleeding disorder.

His wife forced him to tell me that he was a heavy drinker. He reluctantly admitted that perhaps he was an alcoholic and he understood that this could damage his liver. Since the liver function is essential for a proper vitamin K level, we thought he may have developed a vitamin K deficiency.

When I asked “Mr. Jones” and his wife about the potential of a vitamin deficiency, the wife was adamant that it could not be that. She told me that she personally assembled his pill box every week and she always added a multivitamin in to make sure that he received all of the proper vitamins for his health.
When I asked her why she assembled his pill box for him, she said that he takes so many pills that it’s just easier for her to assemble the pill box to make sure he doesn’t forget any medications. She then proceeded to ask me if this was all related to how much he drank on a regular basis. Apparently he would drink six beers a night along with a glass or two of whiskey, and she was not very pleased about it. Her mother had died from complications of cirrhosis due to alcoholism, and she said she would do ANYTHING to make sure that her husband didn’t end up the same way.

As the days passed, “Mr. Jones” had less and less blood in his urine until finally it resolved on its own. He didn’t need any more units of blood. After a week, his coagulation profiles had returned to normal. We never found out what was wrong with him that triggered this terrible episode of bloody urine.

One week later, my upper level resident ran into “Mr. Jones” outside of an outpatient clinic. He flagged her down and proceeded to tell her that he finally understood why he was bleeding. Apparently, his wife had been putting coumadin, an extremely powerful anticoagulant, into his pill box for an unknown amount of time.

Though coumadin is an excellent drug, the amount of coumadin that she was putting into his pillbox was a toxic amount. “Mr. Jones” did not know if she was doing it out of malicious intent or if it was some terrible, terrible accident. Since no one in his family had been prescribed coumadin, he had no idea how she was getting the drug. Perhaps it was an innocent accident. I would like to think that this was the case. But a part of me fears the other, almost too real possibility.

Perhaps his wife thought that if she poisoned him with a drug that he had not been prescribed and he ended up in the hospital, maybe he would think that it was all because of his alcoholism. Maybe this would make him stop drinking. Whether it was fear of cirrhosis or fear of his wife, it did the trick, because “Mr. Jones” is set on never drinking again.

Compassion, honesty and illness: My month in critical care

The other ninety percent 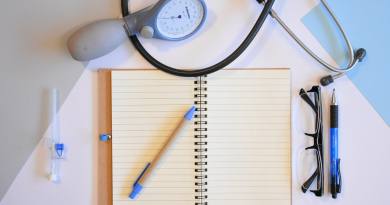 The things you learn: My medical school journey

From the Labs features a cross-section of a uterus from a 3-week-old mouse. Image courtesy of Dr. Diana Monsivais.