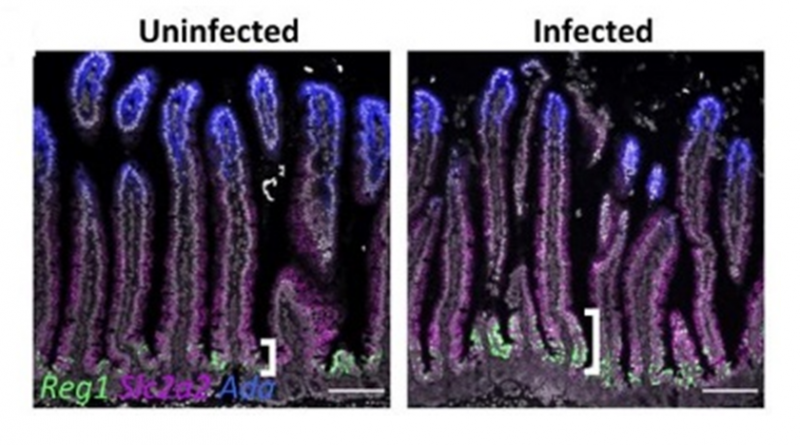 Diseases of the digestive tract affect about 60 million Americans each year. These conditions often are associated with damage to the intestinal epithelium – the lining of the intestines – which compromises its functions, including digestion of food and absorption of nutrients, and the individual’s overall health.

The healing process that follows damage to the intestinal epithelium is not well understood, but work from the labs of Dr. Sarah Blutt, associate professor of molecular virology and microbiology at Baylor College of Medicine, and her colleagues now provides new insights into this important process.

The researchers’ goal on this project was to take a meticulous single-cell analytical approach to study how the intestinal epithelium heals itself after infection with rotavirus in an animal model.

Rotavirus causes approximately 179 million cases of acute gastroenteritis and about 128,000 deaths annually, particularly in children. Getting into the details of the cellular response to the damage resulting from the infection can lead to improved therapies.

The internal surface of the intestines is lined with a layer of epithelial cells that folds multiple times, forming many thin, finger-like projections called villi, with crypts between them. Rotavirus infects and kills enterocyte cells residing at the tips of the villi.

“We know that the damage at the tip is quickly communicated to stem cells residing at the crypt, stimulating them to divide and develop into the specialized cells needed to repair the injury at the tip of the villi,” Blutt said.

To get a closer look at how the epithelium heals, the team applied a fairly new technology, single-cell transcriptomics, to determine which genes were expressed at the single-cell level in all the cells between the tip and the crypt. There are many different types of cells along the villi, including tuft cells, goblet cells, enterocytes and stem cells, each with specific functions.

“Our analyses revealed a complex cellular landscape characterized by clusters of cells with specific transcriptomic profiles that depended not only on the cell type but also on the cell’s location along the villi,” said first author Carolyn Bomidi, senior research assistant in the Dr. Mary Estes lab at Baylor. “For example, the same cell type found in different locations may have different transcriptomic profiles.”

The researchers’ findings also support a new picture of how regeneration happens. They found that, in response to the damage at the tips, subsets of stem cells at the crypt divided more frequently and developed into numerous immature enterocytes that migrated to the tip of the villi to replace those injured by rotavirus.

An unexpected host for rotavirus

Blutt, Bomidi and their colleagues were surprised to find rotavirus genetic material inside tuft cells, a cell type not previously reported to support rotavirus infection.

“The fact that we can detect the virus at all is exciting, given that tuft cells are rare in the intestinal epithelium,” Bomidi said. “Rotavirus-infected tuft cells increased the expression of specific genes, including immune response genes, indicating that they are capable of mounting an antiviral response and contribute to the process following an infection.”

Altogether, the findings provide evidence that rotavirus infection stimulates a repair program driven by stem cells with involvement of tuft cells that results in the production of immature enterocytes that repair the damaged epithelium.

“I am most excited about this being the first report of the characterization of single-cell transcripts following an intestinal human viral infection,” Blutt said. “We consider this a valuable resource of information for scientists involved in gastrointestinal research, to see how each individual cell type responds in the context of a viral infection.”

“I anticipate that this approach also will provide new tools to investigate unanswered aspects of how rotavirus and other infectious or inflammatory conditions cause disease,” said co-corresponding author Dr. Mary Estes, Cullen Chair and professor of molecular virology and microbiology at Baylor.

Read all the details of this work in the Proceedings of the National Academy of Sciences.

Other contributors to this work include Matthew Robertson and Cristian Coarfa, both at Baylor College of Medicine. 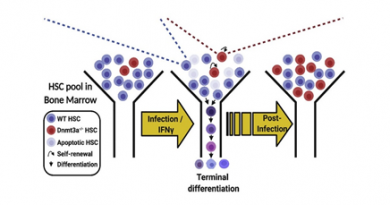