For many cancer patients, the problem is metastasis – the dissemination of tumor cells to other organs – after the primary tumor has been eliminated. Metastases, however, tend to respond differently than the primary tumor to the treatment in part due to residing in a different organ with a different microenvironment.

Recreating biological microenvironments in the lab to study metastatic tumors is quite a challenge, but it has interested a number of labs because it could provide a means to investigate mechanisms involved in new organ colonization by cancer cells, as well as a platform in which to test cancer drugs before they are tried in animal models.

The laboratory of Dr. Xiang Zhang at Baylor College of Medicine has taken a major step forward in the development of these type of biological microenvironments.

“We have created an experimental system in which we can mimic the interactions between cancer cells and bone cells, as bone is the place where breast cancer, and many other cancers too, disseminates most frequently,” said Zhang.

“We have developed a system that allows us to test many different drug responses simultaneously to discover the therapy that can selectively act on metastatic cancer cells and minimize the effect on the bone.”

To mimic the interactions between metastatic breast cancer cells and bone cells in a living system in the lab, Zhang and his colleagues developed a bone metastasis model, called bone-in culture array, by fragmenting mouse bones that already contain breast cancer cells.

The scientists determined that the bone-in culture maintains the microenvironmental characteristics of bone metastasis in living animal models, and the cancer cells maintain the gene expression profile, the growth pattern and their response to therapies.

Using the bone-in model, the researchers determined that the drug danusertib preferentially inhibits bone metastasis. They also found that other drugs stimulate the growth of slow-growing cancer cells in the bone.

In addition to determining the effect of drugs in the growth of metastasis in bone, the bone-in culture can be used to investigate mechanisms involved in bone colonization by cancer cells.

“We think that this new system has the potential to be applied not only to breast cancer but to other cancers that also metastasize to the bone,” Zhang said. “This technique can be scaled up to larger sample sizes, which would help accelerate the process of discovering metastatic cancer treatments. We have already found a few interesting drugs. We will keep looking for more and focus on those that are most promising.”

In the future, the scientists expect to develop this platform into a standardized system that can be used in the clinic to find specific drugs that can better treat metastatic cancer.

Read all the details about this study in Nature Communications.

Dr. Xiang Zhang is an associate professor of molecular and cellular biology and the Lester and Sue Smith Breast Center, and also is a McNair Scholar at Baylor College of Medicine.

Chenghang Zong, Zonghai Li and Michael A. Mancini. The authors are affiliated with one or more of the following institutions: Baylor, Shanghai Jiao Tong University School of Medicine, Weill Cornell Medical College, Houston Methodist Hospital and the University of Texas Medical Branch, Galveston.

Financial support was provided by the U.S. Department of Defense (DAMD W81XWH-16-1-0073, DAMD W81XWH-13-1-0296), the National Cancer Institute (CA183878), the Breast Cancer Research Foundation, Susan G. Komen (CCR14298445), and the McNair Medical Institute. This work was also made possible by the CyVerse Collaborative, funded by the National Science Foundation (No. DBI-0735191), the Integrated Microscopy Core at Baylor College of Medicine with funding from the National Institutes of Health (HD007495, DK56338, and CA125123), the Pathology Core of the Lester and Sue Smith Breast Center, the Dan L Duncan Comprehensive Cancer Center and the John S. Dunn Gulf Coast Consortium for Chemical Genomics. 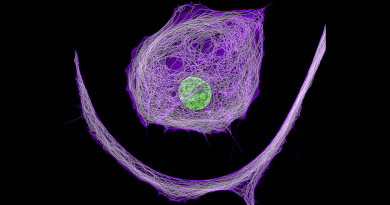