It all began on a Thursday, the day Dr. Daryl Scott goes to clinic to visit patients. One of the patients was a young male with intellectual disability, developmental delay, macrocephaly (enlarged head) and very flexible joints. The genetics lab indicated that the patient did not seem to have any known genetic changes that could explain his condition.

“I took a closer look at the results and saw a relatively small deletion in the X chromosome, identified as Xp11.22; it had only a few genes in it,” Scott said. “The lab indicated that there had been no previous reports about this particular part of the genome causing any kind of medical problems.”

Two of the genes in the deleted section of the patient’s X chromosome were MAGED1 and GSPT2. Scott followed these clues by searching for the genes in a database that describes the functions of genes in the mouse and found that mice that have a deletion of the Maged1 gene have neurocognitive behavioral abnormalities. “This caught my interest,” Scott said, “as it related to my patient’s condition.”

After searching the DECIPHER database, Scott found another patient carrying almost the exact same deletion as his patient, but there was no information about the individual’s clinical problems. Scott immediately sent an electronic message to the physician, Dr. Alex Henderson, at the Newcastle upon Tyne Hospitals in England, in order to learn more about the clinical characteristics of his patient.

After carrying out these electronic investigations, Scott went to see his patient. By early afternoon, he was back in his office checking his email. He found a message from Henderson. He had two male patients (siblings) with the deletion, and intellectual disability, developmental delay and highly mobile joints. Shortly after, Lalani called Scott with more good news. Dr. Patricia Evans, professor of pediatrics, neurology and neurotherapeutics at the University of Texas Southwestern Medical School in Dallas, had a patient with the Xp11.22 deletion and the same clinical features as Scott’s patient.

“In a day’s work we identified four patients on two continents involving three families, and it was all put together within eight hours,” Scott said. “None of the patients and their families had an explanation for the condition before this work. Our findings allowed us to provide them with a genetic diagnosis.”

In every case, the mothers are carriers for these deletions but they do not have any apparent symptoms. Yet, they can have male children that have significant problems. “With this information, we can say to the parents that they have a 50 percent chance of passing this X chromosome with the deletion to a male child. Female children have a 50 percent chance of being carriers. This represents a significant change for the parents; they can now make informed decisions about future family planning.”

It took the researchers a year to get all the documentation for writing and publishing the report, but the actual discovery was within hours. It was essential to the discovery that the researchers had at their disposal technology to find and search genomic databases and to connect electronically and exchange information with other researchers around the world.

Even with the current technological advances, solving medical mysteries such as this one usually entails a much longer period of research. Sometimes, however, modern-day medical detectives can break medical mysteries in record time.

Read the article in PLoS ONE for complete details about this study.

Dr. Daryl Scott is an associate professor of molecular and human genetics at Baylor College of Medicine. 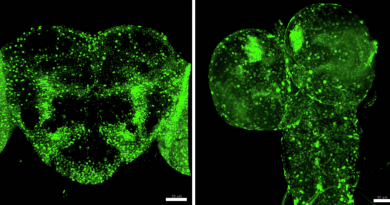 The fruit fly helps unravel the genetics of autism