Some children are born with a devastating form of childhood epilepsy called infantile spasms that cause a life of severe seizures and lifelong disability.

In a study that appears in the journal Science Translational Medicine, Dr. Jeffrey Noebels, professor of neurology, neuroscience and molecular and human genetics at Baylor College of Medicine, and his colleagues gave newborn male mice with the inherited disorder small doses of estrogen (estradiol) for a week after birth. The treatment prevented spasms in infants and potentially catastrophic seizures later in life.

Blue Bird Circle Developmental Neurogenetics Laboratory  and an expert in the field of epilepsy, said, “The treatments we have at this time are not very effective in stopping either the spasms or the long-term effects of the disorder. The dose in this treatment is effective in preventing the epilepsy but is far below the amount that would feminize the male mice. ”

Current treatments with the steroid prednisone and its precursor ACTH used in children can alleviate the spasms, but not the subsequent epilepsy, said Noebels.

The mice in this study had a structural defect in the Arx gene that is a known cause of the disease in male children because the defective gene is located on the X-chromosome. The gene mutation impairs the function of a small group of brain cells that migrate during early brain development.

While estrogen is known as a female hormone produced by female sex organs, it is also made in both male and female brain where neurons manufacture and release it. It is a growth factor that protects immature nerve cells.

Newborns do not make estrogen in the brain

“The machinery to make estrogen in the brain, at least in mice, is not mature on the day they are born,” said Pedro Olivetti, a student in the Baylor M.D./Ph.D. program and lead author of the study. “Until they are born, they get it from their mothers’ blood. All we are doing is replacing the levels to those the mother was supplying before birth.”

In doing so, Noebels said, they restored the defective brain cells and changed the trajectory of the disease. The mice receive the treatment for only a week, but they do not develop the seizures. He and his colleagues have yet to determine whether the estrogen improves the learning, memory and behavioral problems the mutated gene causes in both mice and people.

They also want to find out if this treatment can have an effect in the other forms of infantile spasms that stem from other causes.

“Could this replace the current therapy?” said Noebels. “At the moment, they all receive steroids. Estrogen is considered a neurosteroid.”

The finding demonstrates the value of making mouse models of disease.

“They are a a valuable biological test system to find a better treatment,” he said. 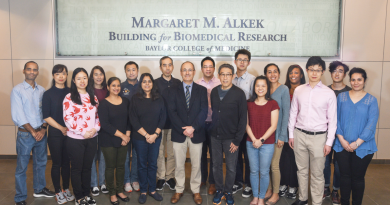