More than 20 years ago, Dr. Huda Zoghbi began a quest – first to find a gene that caused a devastating neurological disorder called spinocerebellar ataxia 1 and then to unravel the secrets and fix the problem.

The issue became more than intellectual as she traveled dusty back roads and attended family reunions to meet those who had the autosomal dominant disorder and the parents, siblings and children who cared for them as they followed a relentless course.

First, they lost their ability to walk and balance, followed by problems with speaking, swallowing, and, at times, cognition.

Their lifespans are significantly shortened by the disease. The children of a person with disorder has a 50 percent chance of inheriting the dominant gene that causes it and, thus, the disease.

In 1993, Zoghbi, now professor of molecular and human genetics at Baylor College of Medicine, and her collaborator, Dr. Harry Orr of the University of Minnesota found the gene. Later Zoghbi and members of her laboratory developed a mouse model of the disease that allowed laboratory research to continue.

For a long time, the only comfort that could be offered to those with the disorder was earlier diagnosis and advice about childbearing to those with and without the gene.

“It was one of the hardest things I have had to deal with,” said Orr. “We cloned the gene 20 years ago and we don’t have anything to take to the patients. We are not where we thought we would be 20 years ago.”

Yet Zoghbi and her collaborators did not give up. She found other genes, notably MECP2, the gene associated with Rett disorder. Her laboratory grew and she became the first director of the Jan and Dan Duncan Neurological Research Institute at Texas Children’s Hospital.

Last week in the journal Nature, she, Orr, Dr. Juan Botas and Dr. Thomas Westbrook (both of BCM) and collaborators published a blueprint for understanding spinocerebellar ataxia 1 and a possible mode of attack.

Instead of trying to eliminate the mutated ataxin-1 from the body (already proven to cause other problems), why not look at the pathway involved in its production and reduce the levels of ataxin-1 less dramatically – by about 25 percent? It works in mice models, and Zoghbi and her collaborators hope that this concept may be applied in other, more common neurodegenerative disorders such as Alzheimer’s and Parkinson’s disease.

“It is really exciting because the story has so many elements,” said Zoghbi. “Reducing protein levels can rescue the disease.”

“This is getting us really close,” said Orr, “not only for SCA1, but I think it’s going to be a guidepost for work on a lot of other neurodegenerative diseases.”

For additional details on their research, see the news release. 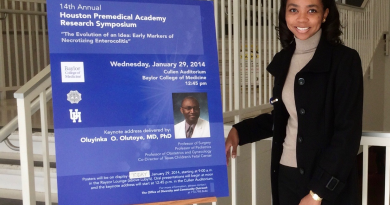 ‘Saturday Morning Science’ inspires medical student to give back to community

Myths about autism and vaccine spacing

0 thoughts on “Decades-long mission: Solving the puzzle of a neurological disorder”