Human noroviruses – the leading viral cause of acute diarrhea around the world – have been difficult to study because scientists had not found a way to grow them in the lab. Now, more than 40 years after Dr. Albert Kapikian identified human noroviruses as a cause of severe diarrhea, scientists at Baylor College of Medicine have, for the first time, succeeded at growing noroviruses in laboratory cultures of human intestinal epithelial cells. This work, published in Science, represents a major step forward in the study of human gastroenteritis viruses because it establishes a system in which a number of norovirus strains can be grown, which will allow researchers to explore and develop procedures to prevent and treat infection and to better understand norovirus biology.

“People have been trying to grow norovirus in the lab for a very long time. We tried for the last 20 years. Despite all the attempts and the success of growing other viruses, it remained a mystery why noroviruses were so hard to work with,” said senior author Dr. Mary Estes, Cullen endowed professor of human and molecular virology and microbiology at Baylor and emeritus founding director of the Texas Medical Center Digestive Diseases Center.

The road to solving a 48-year-old mystery

Norovirus is the leading cause of foodborne illness and of acute gastroenteritis in all age groups in the U.S., according to the Centers for Disease Control and Prevention. Also known as the cruise ship virus, norovirus does not grow in laboratory cultures that traditionally support the growth of other viruses, such as transformed cells that are derived from cancerous tissues. In addition, noroviruses are species specific – human noroviruses only infect and cause disease in humans, and mouse noroviruses only do so in mice. Human noroviruses do not grow in mice or other small animal models typically used for research.

“My idea was that we had not succeeded at growing noroviruses because we didn’t have the right cell type,” said Estes.

“We first showed that in patients with chronic norovirus infections, the virus could be detected in intestinal cells called enterocytes, but normal human enterocyte cells rapidly died when put into culture. A breakthrough came when we learned that Dr. Hans Clevers’ team in the Netherlands had developed a method to make a new type of human intestinal epithelial cell culture system including enterocytes. These novel, multi-cellular human cultures, called enteroids, are made from adult intestinal stem cells from patient tissues. We anticipated that putting the virus in these non-transformed human cell cultures would let the virus grow.”

“I have been working with Dr. Estes for five years trying to cultivate this virus,” said co-first author Dr. Khalil Ettayebi, senior staff scientist in Estes’s lab. “We tried many approaches but obtained only negative results until we started using the new human stem cell-derived enteroid cultures in the laboratory.”

It took Estes and colleagues about one year to get the human intestinal epithelial cultures growing well in the lab. Then, before they tested the cultures with noroviruses, they tested them with another human gastrointestinal virus, rotavirus.

“Rotavirus grew well in the human intestinal epithelial cell cultures,” said Estes. “Then, we tried the human norovirus and found that some strains would grow, but others wouldn’t. We suspected that still something was missing.”

The researchers tried to improve the growth of the viruses by adding to the cultures substances that are naturally present in the upper small intestine, the natural environment where the virus grows. Other intestinal viruses, such as rotavirus, use these substances to grow inside the body.

“The human body responds to food by secreting enzymes from the pancreas and bile from the liver into the small intestine. Pancreatic enzymes digest the large molecules and bile solubilizes fats,” said Dr. David Y. Graham, professor of medicine and molecular virology and microbiology at Baylor and the Michael E. DeBakey Veterans Affairs Medical Center. “Viruses that cause gastroenteritis, such as rotavirus, utilize pancreatic enzymes to trigger their replication, but these enzymes had no effect on norovirus. We asked, if pancreatic enzymes were not important, was bile a key component allowing the virus to recognize where it was and replicate?”

“When we added bile to the cultures, norovirus strains that didn’t grow before now grew in large numbers!” said Estes.

“I was most excited when we discovered that bile allows the successful replication of human noroviruses,” said co-first author Dr. Kosuke Murakami, post-doctoral associate in Estes’s lab.

“This new cultivation system will finally allow us to gain an insight into how this virus causes disease,” said co-first author Dr. Sue Crawford, an assistant professor of molecular virology and microbiology at Baylor.

“We finally solved the 48 year old mystery. We were able to grow norovirus in cultures that mimic the intestinal environment, where the virus naturally grows, by adding bile to the cultures.”

“Bile is critical for several important bacterial pathogens, but this is the first time it’s been shown that bile is important for the replication of human intestinal viruses,” said Estes.

A novel culture system that retains properties of the small intestine

The human intestinal epithelial cultures are truly unique and the researchers anticipate that the cultures will allow them to answer important questions, such as why one strain of norovirus infects one person, but not another.

“These novel cultures are really remarkable as they retain properties of the different regions of the small intestine, and are physiologically active,” said Estes. “Each culture is unique and reflects the genetics of the individual from whom the culture was established. This allowed us to show that some cultures, like some people, are susceptible to only one or to several human norovirus strains. These cultures will allow us to determine the mechanisms that restrict replication in some people, but not others.”

This is the first example where human intestinal epithelial cultures have been used to cultivate a non-cultivable agent.

“I predict this new culture system, changing certain conditions, will allow for the cultivation of other viruses or bacteria that we cannot grow at the moment. If we succeed, it will help us develop effective methods to prevent and treat infection, test vaccines, interrupt transmission, and better understand how these microbes infect people, respond to bodily defenses and evolve,” said Estes.

This work was supported in part by Public Health Service grant PO1 AI 057788 and Agriculture and Food Research Initiative Competitive Grant 2011-68003-30395 from the USDA National Institute of Food and Agriculture. The authors acknowledge the assistance of the Study Design and Clinical Research Core and Cellular and Molecular Morphology Core of the Texas Medical Center Digestive Diseases Center and the Cytometry and Cell Sorting Core, which are supported in part by Public Health Service grants P30 DK-56338, P30 CA-125123, NIAID AI036211 and the Dan L Duncan Cancer Center at Baylor College of Medicine.

Enteroids are available with a Material Transfer Agreement from Baylor. Baylor College of Medicine has filed a patent application related to this work. 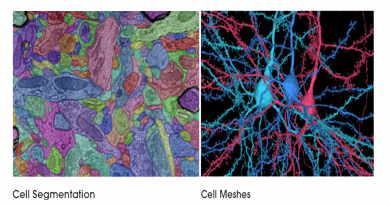