Scientists are using DNA to build nano-scaled devices – DNA origami – that could be used to improve our understanding of basic biological mechanisms as well as to design novel strategies to prevent or treat disease.

DNA is well known as the carrier of the genetic information in living organisms. The DNA double helix is flexible. It can twist, bend and stretch to form complex 3-D structures. “Scientists realized that it could potentially be engineered to create a variety of shapes,” said Dr. Wah Chiu, distinguished service and Alvin Romansky professor of biochemistry and molecular biology at Baylor College of Medicine.

“In the beginning, the DNA engineer had to work laboriously to figure out how to engineer a piece of DNA device, what we call origami. Originally, it was more of an intellectual exercise but in the last few years the science has blossomed, and DNA origami has become an exciting area of research and development,” said Chiu. “DNA nano-scaled devices can potentially be used as scaffolds for vaccines, carriers for gene editing or diagnostic tools, drugs or archival memory storage.”

Automating the design of DNA origami

The first DNA origamis were designed by hand, which limited the technique to a small group of experts in the area. To expand the availability of DNA origami, scientists developed an algorithm that created DNA devices automatically.

A major step forward in DNA origami design appeared in the May 26, 2016 issue of Science. In this paper, Chiu and colleagues from MIT and Arizona State University collaborated to develop a process that includes design, synthesis, assembly and validation of the final DNA devices.

DNA origami: a bioengineering design of biomaterials that can have practical applications. Animation courtesy of Wah Chiu, Mark Bathe and Kaiming Zhang.

The algorithm first represents the object as a perfectly smooth, continuous outline of its surface. It then breaks the surface up into a series of polygonal shapes. Next, it routes a long, single strand of DNA, called the scaffold, which acts like a piece of thread, throughout the entire structure to hold it together.

“The algorithm weaves the scaffold in one fast and efficient step, which can be used for any shape of 3-D objects,” said corresponding author Dr. Mark Bathe, an associate professor of biological engineering at the Massachusetts Institute of Technology. “That [step] is a powerful part of the algorithm, because it does not require any manual or human interface, and it is guaranteed to work for any 3-D object very efficiently.”

“We have worked out a work flow for nucleic acid engineering. It’s a new bioengineering design of biomaterials that can have practical applications,” said Chiu.

Using this algorithm, called DAEDALUS after the Greek designer of labyrinths, the MIT team designed and synthesized over a dozen DNA nano-scaled shapes. The 3-D structures of several of these devices were confirmed in Chiu’s cryo-electron microscopy lab at Baylor.

Other contributors to the paper include Rémi Veneziano and Sakul Ratanalert from MIT, Kaiming Zhang from Baylor, and Fei Zhang and Hao Yan from Arizona State University. 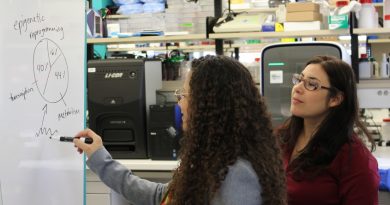