My mother was a nurse, and in the small Texas town where I grew up, that made her a medical expert. When I was about 7 or 8, she came home with a small package and a bright smile on her face – her smile that lit up the world for me when I was a little girl.

“Remember when we went out collecting for the March of Dimes?” she asked. Of course, I did. The little boxes had to be put together and our neighbors dropped in coins when we asked.

“Well,” she said, “it worked.” The small package contained vaccine, and she started the process of immunizing my sister and me against polio. In Houston and my small town, as well as nearby cities, polio was an annual scourge, regularly attacking without warning, either killing or leaving children and young adults forever changed.

To my mother and the other parents who feared the onslaught each year, the vaccine was a miracle. Their children would be protected.

Of course, a few months later I contracted measles – rubeola or what we called the red measles. My temperature spiked, I couldn’t open my eyes in bright light and I sported a coat of bright red spots that enlarged and touched one another. I could not eat and I did not want to drink.

We were on vacation and waiting in line to go up the Washington Monument when I started sporting the spots. That is when my mother realized I had a fever. I had not been feeling well, but I didn’t want the vacation to end.

We drove through the night to my grandmother’s home in Connecticut. The doctor came out to see me.

I remember that he looked at my mother: “Has she been to the schools?” Measles is one of the most easily transmitted viruses in the world, and he wanted to know if he should prepare for an epidemic.

There was no vaccine against measles at the time, and parents just accepted that we would get chickenpox, measles, German measles and mumps. Think of it. Each so-called “childhood” disease kept us out of school for at least a week and some two or more. We risked pneumonia and other even more severe side effects. Most of us escaped unscathed, but the risks were real.

My mother knew, and she hovered through every disease. Slowly, medical science caught up.

My children received the measles, mumps and rubella vaccine, but that against chickenpox came too late. They received other vaccines for diseases that occurred but were not recognized when we were children.

By the time I had a child, they did not vaccinate her against smallpox. That disease had been eradicated from the world. Public health experts felt they were closing in on polio (although that dream has been stymied by war and misinformation).

That is what makes the current measles outbreak in California so sad.

The decision by parents not to vaccinate their children has not only placed their offspring at risk, which is unfortunate in itself, but it has also placed infants and those with compromised immune systems at risk. Those are the people who are most likely to suffer the dangerous side effects.

The disease has spread out from California and even into Mexico.

The decision not to vaccinate is not based in science. Science has tested the purported link between autism and vaccination and found it lacking.

I cannot imagine what my mother would say. She cared for children who had all these diseases, and she knows the risks they pose. My sister is a pediatric infectious disease expert who has seen the worst that measles can cause.

And there are other risks. Do parents who eschew the measles vaccine avoid others? Is it just too hard to make those appointments at the doctors’ offices?

When tau tangles, RNA errors can happen in Alzheimer’s disease 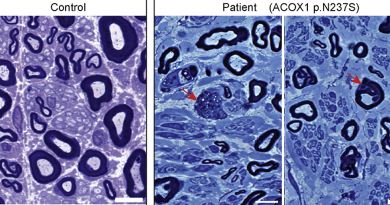 3 thoughts on “A matter of health — The promise of vaccination”