I somehow managed to skate through the first 18 months of my clinical rotations without witnessing a true code blue.  Of course, I had heard them paged overhead, but at the larger hospitals at which we rotate, there were always dedicated code teams that responded to these codes.  I also had the unusual good fortune that none of the patients that were under the direct care of my teams ever coded.

Of course, as a medical student, one typically does not receive formal training in ACLS until right before heading off to residency, so the closest I had come to a code blue was during my BLS training as a first year.  I remember being instructed on the proper CPR technique and being given the opportunity to practice on the manikins.

And so my colleagues and I took turns buffeting the spring-loaded chests of the uncomplaining mannequins while jovially humming “Staying Alive”.

Fast forward two and a half years, during a PM&R elective as a third year, I sat in on a lecture intended to refresh the residents on ACLS protocols.  As the attending presenting the lecture guided us down the neatly outlined diagrams of the protocols, I felt bolstered by the chain of ovals and rectangles one leading to the next connected by precise, uncompromising arrows.

What a relief to have this well-delineated plan of action available when one finds oneself in this dire and indubitably chaotic situation.  I couldn’t help but imagine myself one day in this situation, because it is a day that will come in every physician’s career sooner or later.

It is the stuff of television ER dramas. The code blue is one of the most highly publicized examples of how a physician quite literally has a patient’s life in his or her hands.  Whether I like it or not, these depictions probably had an undue influence on my own mental image of how a code blue would go when it was my turn to run the code – or at least, how I hoped would go.

I imagine myself calmly taking the helm, steadied by the unwavering decision tree of ovals and rectangles, methodically administering the appropriate sequence of compressions, medications, and shocks, if necessary.  In the end, one always imagines the pulse miraculously reappearing on the screening, blipping along as if nothing had transpired.  You are lauded and the day is saved.

Nothing could have prepared me for witnessing my first code blue.  It was the day after the ACLS lecture.  True code blues in PM&R are rare in the sense that generally, in the rehab setting, the code is called because of a late seizure in a stroke patient, mucus plugging causing desaturations in a spinal cord injury patient, or some other condition that results in an alteration of patient responsiveness that is short of cardiopulmonary arrest.

The room was already filled with people when we arrived.  The attending stood by the bed doling out orders in rapid-fire sequence, “Go call EMS,” to a tech, “Get me epinephrine,” to a nurse, “You all, get in line to help compress,” gesturing to a mixed huddle of bystanders which happened to include me.

I took my place behind a line already comprised of six or seven people.

At the head of the line, one of the residents was in the midst of administering compressions.  He leaned with his entire body with each push.  There was no bright clicking of a spring-loaded chest, only the dull thudding of the patient’s body compressing the mattress with each push.

There was no humming of “Staying Alive”.

Despite following the protocol to a tee, I felt none of the “grace-under-pressure” sensation I expected to feel with this protocol, this brainchild of evidence-based modern medicine, on my side. Instead, I felt overwhelmed by the tension, the desperation, the sheer helplessness I felt in the room, as we battled with all our might against death, which was resolutely encroaching on this poor man in the bed, as if in blatant of the feeble tools that we have at our disposal.

As the resident fatigued, and another resident took his place performing compressions, I felt fear grip my stomach and twist it into a tight knot as I took a step forward in the shortening line.  In this moment, I felt none of the stalwart courage I had hoped I would feel.

Instead, I felt an unexpected upwelling of horror at the violence I was witnessing being exacted on this man.  It was one of those guttural responses I had been so well trained to suppress during my years of medical school. It starts with the graphic pictures of diseased and deformed body parts we so routinely see flashed on screen during our preclinical lectures, which we go on to blithely review without a second thought, perhaps in plain view of other, less squeamish customers at our favorite local coffee shop.

Later, in the clinical setting, we are trained to discuss and think about symptomatologies and pathologies, often in isolation of the people that suffer them.  What is shocking to most people becomes mundane to us.

“How do you handle seeing all that blood?” your non-medical friends and family will ask.  And you just shrug.

After a while, you can experience all of the blood and other bodily fluids as well as the untoward and unsightly things that happen to people as a result of injury or disease without feeling much.  At least, that had been my experience.

Of course, this is in some way necessary to the day-to-day practice of medicine.  But what struck me most about that unexpected feeling that day, was the contrast to how little I often felt.  Here with this man lying in front of me, there was no way to escape the horror I felt with intellectualizations and abstractions.  No doubt, his cardiac arrest was horrible, but the treatment, with the relentless crushing of his chest, was also horrible.

As it neared my turn in line, I felt my own heart pounding louder and louder in my ears.  Just as I thought my own anxiety would be too much to bear, EMS arrived.  The room cleared out as they took over, and my attending gestured that it was okay for us to return to clinic.

I felt shaken the rest of the day.  At first, I felt ashamed for feeling so overwrought during the code. I had spent the better part of the last three years developing my “immunity” to being disturbed by sights or events that would disturb members of the non-medical community. There is an undertone in the cultural of medicine that lapses in this immunity are somehow a weakness or shortcoming of the practitioner.

What I realized later though, was what I was feeling that day sprang not only from fear but also from empathy with that man lying in the bed. There was nothing glamorous about what we were doing to that man in our efforts to save him. It was violent, and it was not likely to succeed – only one out of every five patients without a pulse will be successfully resuscitated, despite what Grey’s Anatomy would have us believe.

Running a code, and everything else we do as physicians for that matter, is more than following a neatly branching network of ovals and rectangles, it is about fighting to preserve and better something that is fragile, fleeting, and invaluable: human life.

When charged with this herculean task in the face of odds stacked against you, you should feel something…even if it is fear, or some other emotion other than your overwhelming confidence in your ability to save this person’s life.

Clearly, as I progress through my medical career, I will need to expect and manage these emotions so that when it is my turn to compress or my turn to give the orders, I will be able to.  However, I will forever remember my first code blue as a reminder to acknowledge and embrace humanity that underpins all that we are trying to do.

Where space exploration and medicine meet 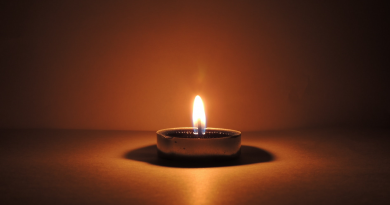